Speed things up with a laptop powered by AMD

AMD Ryzen™ 4000 Series Mobile Processors offer the most cores available for Ultra-thin laptops, with the performance to do more, from anywhere - faster than ever before

The AMD Ryzen™ 4000 Series Mobile Processors offer the most powerful and efficient processors for ultra-thin laptops. The high number of cores allow users to accomplish more tasks faster than ever before while still providing as much battery life as possible from an ultra-thin laptop computer. The AMD Ryzen™ 4000 series mobile processors are built with power efficiency in mind, lasting up to 13 hours on a single charge - perfect for constant use without losing your work or entertainment mid-task! With 12 cores at 3GHz+, this CPU will take care of any task you throw its way, including gaming video editing, music production. 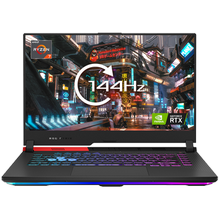 Most Powerful. Most Portable.

Up to 8 ultra-responsive "Zen 2" processor cores for productivity, gaming, and content creation on-the-go.

More cores means more performance, and with up to 8 powerful "Zen 2" cores, you can do more, faster than ever before, with responsiveness that leaps into action for work and play. The Best Entertainment, Built In

Be immersed in every detail with built-in AMD Radeon™ Graphics as you edit photos and videos - and stream your favorite shows in vibrant 4K resolution and HDR.

Say "no" to plug-in anxiety and say "yes" to streaming another episode - with up to 2x the power efficiency of the previous generation. Built for the most demanding gaming and content creation workloads, AMD Ryzen™ 4000 H-Series Mobile Processors are the new standard for performance in innovative, thin and light laptops.