The GeForce RTX™ 3070 is powered by Ampere-NVIDIA's 2nd gen RTX architecture. Built with enhanced RT Cores and Tensor Cores, new streaming multiprocessors, and high-speed G6 memory, it gives you the power you need to rip through the most demanding games.

Gain an edge over the competition with a Custom Build PC powered by a high-end NVIDIA GeForce RTX 3070 graphics card. Powered by Ampere architecture and cutting-edge AI features, you can expect only ultimate performance from this 2nd gen RTX architecture armed machine! Enjoy top gameplay with realistic ray-traced images that are just as sharp in real life as they are on your screen.

Ships out Next Business Day £350 Off 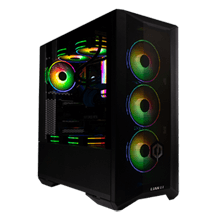 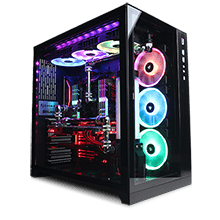 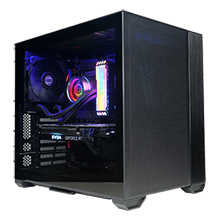 NVIDIA DLSS is groundbreaking AI rendering that boosts frame rates with uncompromised image quality using the dedicated AI processing Tensor Cores on GeForce RTX. This gives you the performance headroom to crank up settings and resolutions for an incredible visual experience. The AI revolution has arrived to gaming.

Ray tracing is the holy grail of gaming graphics, simulating the physical behavior of light to bring real-time, cinematic-quality rendering to even the most visually intense games.

UP YOUR CREATIVE GAME

Take your creative projects to a new level with GeForce RTX 30 Series GPUs. Delivering AI-acceleration in top creative apps. Backed by the NVIDIA Studio platform of dedicated drivers and exclusive tools. And built to perform in record time. Whether rendering complex 3D scenes, editing 8K video, or livestreaming with the best encoding and image quality, GeForce RTX GPUs give you the performance to create your best. Steal the show with incredible graphics and smooth, stutter-free livestreaming. Next-generation hardware encoding and decoding combine to show off all your best moments in exquisite detail. And the all-new NVIDIA Broadcast app takes your livestreams to the next level with powerful AI capabilities to improve audio and video quality with effects like virtual background, webcam auto frame, and microphone noise removal. GeForce RTX 30 Series GPUs deliver the performance and image quality you need to give your audience your best-every time.